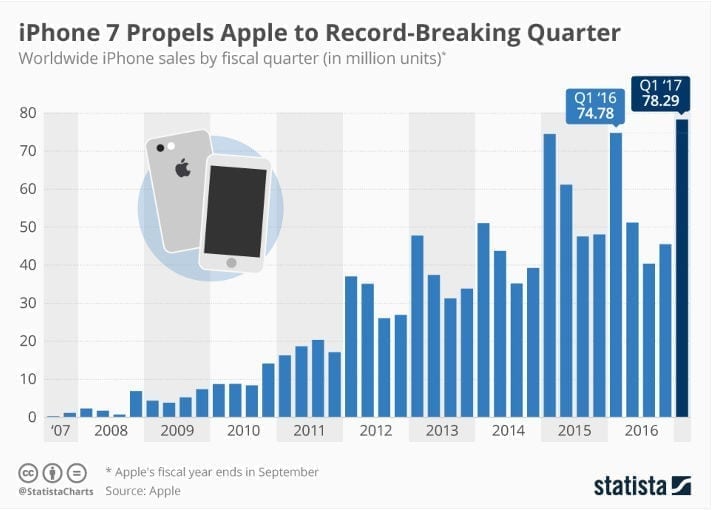 Funny how expectations don’t always turn out as expected. I can recall analysts saying during the past year that iPhone 7 was not going to produce the sales numbers Apple needed to maintain its lead in smartphone sales.  Well according to the fiscal report from Apple sales in the first quarter of 2017 has beaten all expectations. The iPhone 7 has enjoyed really big numbers. In fact, Apple has set revenue records in several product categories. This would include not only the iPhone but Apple Watch, Mac and Services as well.

The Cupertino-giant reported 78.3 million iPhones were sold between October and December.  This beats not only analysts expectations of 76 million iPhones but Apple’s own past sales numbers by about 3.5 million units.

Of course, the 2016 Holiday shopping season helped to produce such numbers. I’m sure that was no accident and all part of Apple’s well-played strategy. Demand for the top model iPhone, the iPhone 7 Plus was beyond anyone’s expectations and higher than past numbers for the Plus model. App Store purchases amounted to over 3 billion dollars in December alone.

Even with supply constraints early on for the new MacBook Pro the Mac enjoyed it’s highest earnings ever during this time frame. A large number of Macs were sold to new Mac users who presumably moved over from Windows.

Apple reported that Q1 2017 was the best quarter ever for the Apple Watch. High demand during the holidays made this possible.

I’m fairly confident that Apple benefitted to some degree from Samsung’s very difficult year in regards to Samsung’s Galaxy Note 7. Thankfully that episode is behind Samsung and it will be providing stiff conception to Apple with new releases in the Galaxy line of smartphones.

Huawei has also been providing stiff competition outside of North America with its very popular smartphone.  Then there is Google’s Pixel.  In spite of all this, Apple has reported its highest earnings ever.