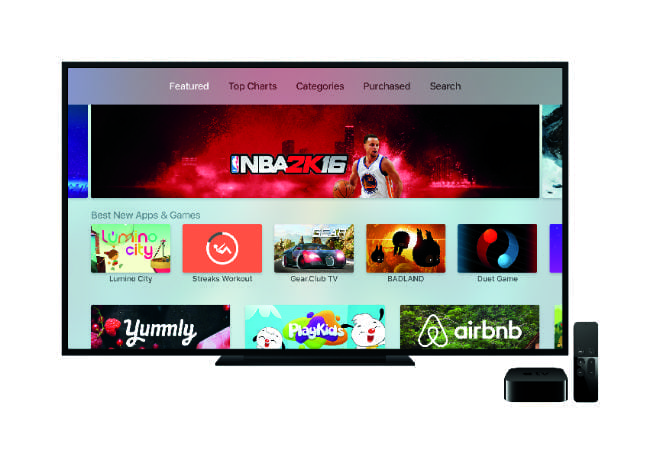 Apple is working on a new model of their set top box, the Apple TV. According to reports, the new box will release ‘as soon as this year’. The new version, which is believed to be codenamed ‘J105’, will be an incremental update to the 4th Generation Apple TV. Moreover, the box will have support for UHD 4K resolution, with the required hardware upgrades required.

Apple’s efforts to transform and revolutionize the living room experience have been in the news for some time now. However, these attempts have not thus far born fruit. Reports even suggest an MFi game controller alongside the Apple TV.

Apple has in the past attempted to make deals with cable proprietors but has failed in doing so. Apple aims to bring its TV box as a vital hub of the TV experience. So much so, during development, some prototypes of the product had a coaxial port. This means that Apple had plans to supersede the cable box entirely.

Reports also show that the microphone was initially placed in the Apple TV box instead of the remote. This was removed as it would result in users having to yell for the voice commands to be heard. The Siri Remote is a much more feasible choice.

Bloomberg reports say that the TV app was initially aimed for viewing sports and live shows. However, the features could not be added as Apple’s content deals had failed. The design of the tvOS home screen is reminiscent of the iPhone home screen. Consequently, Bloomberg claimed that the operating system is much ‘less ambitious’ OS designs from Apple.

The Apple TV software is generally quite bleak. The current 4th Gen Model has an iPhone-esque app drawer, but this wasn’t initially imagined. An internally popular theme called “Intentions” had four central tabs on the screen. These were to be labeled Music, Gaming, Video, and Others. A different approach allowed users to bring preview content by floating over icons. Rumors of a ‘skinny bundle’ have also been out for some time. Apple aimed to sell bundles of cable channels, broadcast networks and video on demand (movies and TV shows). A monthly subscription system was planned for the bundles with $30-$40 as the fee. However, Apple’s plan failed as the negotiations with the involved parties were unsuccessful.

Apple’s recent hiring of the Amazon Fire TV ex-executive to manage Apple TV suggests their plan for a comeback. On one hand, it seems that Apple will go on to revolutionize the television system ultimately. On the other hand, their failing deals and negotiations suggest that this revolution might take some time. Nonetheless, for now, Apple seems motivated towards the right path as the recent 4K update shows. Only time will tell what the future truly holds for the Apple TV set top box.