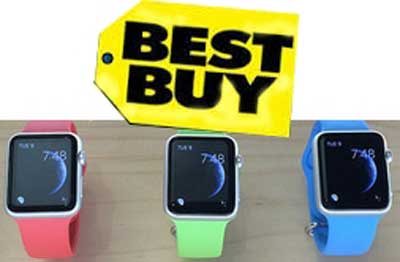 Apple Watch at Best Buy was announced this Sunday. According to the announcement the Apple Watch will be available in over a hundred Best Buy outlets starting from August 6, 2015.

Needless to say,  this is quite a big deal since it  will be the very first time this particular Apple gadget will be sold outside of an official Apple store. Perhaps this will mark a trend of Apple products being generally available outside of the Apple store.

Best Buy reportedly has plans to introduce the Apple Watch to over three hundred of its stores this year before the shopping frenzy of the holiday season starts. Since its launch, the Apple Watch has been limited to the online Apple store as well as the official Apple store branches located in cities around the world. It has also been available in a few selected third party resellers. However, this will all change starting August 7 when the Apple Watch Sport, stainless steel Apple Watch products and Apple Watch’s official accessories will be available at a Best Buy near you. This means that 16 models and 50 accessories are to be sold at Best Buy. But the people at Best Buy are not offering the Apple Watch’s exorbitant gold model, priced at a hefty $10000, on sale initially.

Amid rumors of the Apple Watch not doing too well the strategy of offering the Apple Watch at Best Buy seems to be a prudent choice. But Apple has denied the existence of any such problems with the sale of its latest gadget saying that this move has been made in order to make the Apple Watch “one of the key top holiday gifts and wanting to have it in more places than we currently have it”. Reports of the Apple Watch sales slowing have been declared as ‘absolutely false’ by Tim Cook, Chief Executive Officer of Apple. Indeed he states, quite emphatically,  that the Apple Watch was off to a great star considering that it is only available at 660 locations compared to the  220000 locations that the iPhone can be bought at. Apple Watch is currently available in only 19 countries and the tech giant hopes to offer it in 3 more countries in the near future.