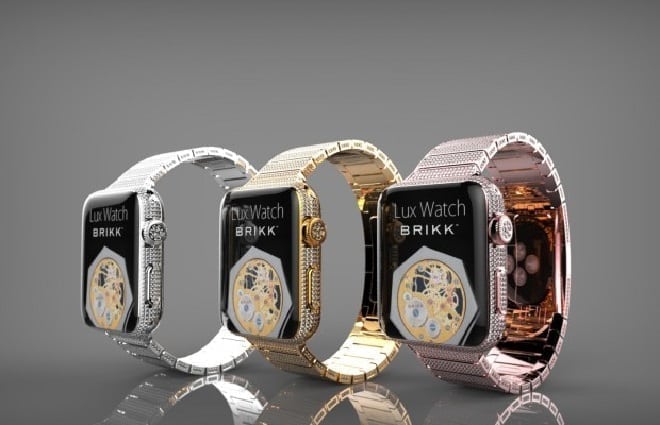 Apple is notorious for charging a steep premium on its products. If there’s one thing they’re good at, it is hardcore marketing that’s designed to cream off the most devout customers before going more mainstream. After all, it is all about the ‘bling’ for many Apple fans. Continuing on with their tradition of making ‘luxury’ versions of its already premium products, Apple has announced a diamond encrusted Apple Watch that will set you back $75,000.

Pretty steep, I know. This is as hardcore as it can get. It seems like Apple is going all-in with its first new product since (the late) Steve Jobs. We recently looked at how the upcoming Apple Watch may be priced, and while that is all mostly speculation, we have confirmed the news that the diamond-encrusted Watch will relieve you of at least 75 grand.

This sort of offering isn’t unprecedented. Plenty of other companies encrust diamonds to Apple devices and charge a premium. Brikk was the company behind the creation of gold-plated iPhone 6. This same company is offering a diamond and a 24-karat gold version of the Apple Watch, both of which are available on pre-order as of now.

The price of the Watch will start from around $350 for the sports model made out of aluminum. The regular model made out of stainless steel will cost you roughly $500. The diamond/gold – or Lux, as the company calls them – Watches are another matter.

The Lux Watch will come in three versions; Standard, Deluxe, and Omni. The Standard version will carry 0.5-0.6 karat diamonds and will cost a hefty $8,000. A pre-order will require a $2,000 non-refundable deposit.

The Deluxe version will set you back $13k, including a $3k pre-order deposit. It comes with 2.0 – 2.3 karat diamonds and doesn’t look very different from the Standard version.

All three models of the Lux Watch are available in two sizes, 38mm and 42mm. These models come complete with an aluminum Zero Halliburton case and a one-year warranty. The company will start shipping them 4-6 weeks after the official launch which is expected to be in April.

What are your views on this ‘Lux’ version of the Apple Watch? If you had the money to spare, would you buy it? Let us know in the comments section below!