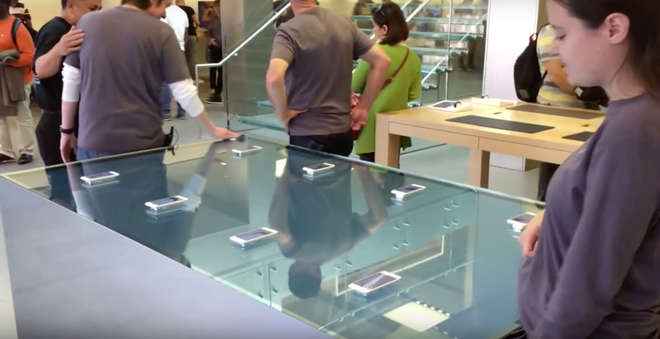 Some of the flagship Apple Stores located in San Francisco and New York have installed new “Force Touch” interactive tables, which serve the purpose of showing off the new 3D Touch which is featured on the latest iPhones, iPhone 6S and 6S Plus. In these retail locations, there is an exclusive table that houses iPhone 6S models. These specially designed tables help the public to understand the concept of 3D Touch.

The table displays a water animation that is responsive to the Force Touch sensors present on the iPhones which all display a fish. When a user force presses and uses the 3D Touch feature on the screen of one of the iPhones the table reacts to the applied pressure with a neat rippling water effect which can be clearly seen.

You can view the functioning of this touch-enabled tables on YouTube.

Currently, these Touch interactive tables are only spotted in San Francisco and New York but it is quite plausible that the Cupertino-based company installs them in further other stores around the globe as part on the newly launched iPhone 6S promotional effect. iPhone 6S and 6S plus boxes and their live wallpapers also feature the fish theme of the table and iPhone duo.

The technology giant tagged 3D Touch, the crown jewel feature of the latest iPhones, iPhone 6S and 6S Plus. Moreover, Apple went on saying that the new 3D Touch is the “next generation” of Multi-Touch.

The 3D Touch is equipped with the new pressure-based gestures which enable the users to “Peek” at a content link, the links present in Messages or Mail with a slight press. The users can also “Pop” into that content with a longer and stronger press. It does not stop here as Touch also includes a variety of other ‘Quick Actions’ for accessing numerous applications content directly from a small tap like press on an app icon present on the Home screen. 3D Touch is also getting increasingly popular amongst the developers, as the latest updates of applications also include numerous features which can be used with the help of 3D Touch.