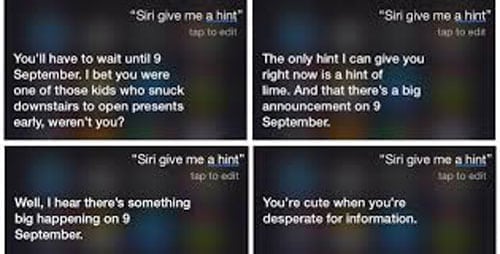 So we’ve always known that the people over at Apple have a great sense of humor but they’ve been getting wittier and wittier in the lead up to Wednesday’s event. It was previously reported that Apple released the invitation to Wednesday’s event with the tagline ‘Hey Siri, give us a hint’ on August 27, 2015. On saying this line to Siri, users are met with a number of humorous one liners and are ‘trolled’.

This, when translated from the binary into English, reads as ‘gotcha’.

Other new answers to “Siri, give us a hint” include:

(1) “I’ll give you three: it has opposable thumbs, a highly developed sense of humor, and rhymes with ”syzygy.”  Oh wait. I’m thinking of something else. I think you’ll find out tomorrow.”

(2) “Sure thing. It’s going to be…hey wait, you’re not disclosed. Sorry. You have to wait until tomorrow like everyone else.”

(3) “Sorry. I missed the super secret keynote meeting because I was busy reminding 3 million people to call their mom.”

(4) “Well, here’s a tip: Take pictures of friends holding things you’ve lent them so you’ll remember down the road.”

The tomorrow’s all refer to the ‘Hey, Siri’ event on Wednesday.

With tomorrow’s event, you can expect a number of cool new things! It is expected that Apple will be announcing it’s new iPhone 6s and iPhone 6s Plus models with the revolutionary ‘Force Touch’ feature tomorrow. We also expect Apple to introduce the iOS 9 mobile software (which will also include a smarter version of Apple’s virtual assistant) as well as a new Apple TV set-top-box which will include advanced capabilities for game-playing and applications. According to a few experts, the TV box can be used to stream TV shows and movies. There are also rumors that a new iPad version might also be in the pipelines.

The event is set to take place at the Bill Graham Civic Auditorium in San Francisco, California. It will start at 10 am PST. The event will be covered live at this blog  tomorrow with blow by blow accounts of all the happenings. We hope you will join us here tomorrow for the live coverage.