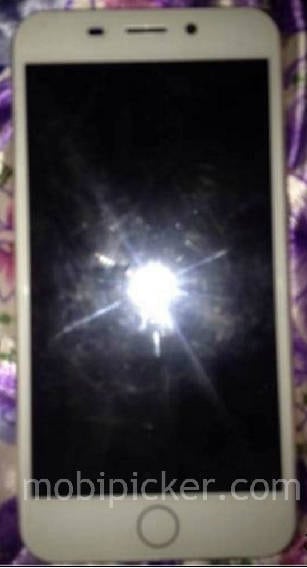 A supposedly leaked image of the iPhone 7 has surfaced on the internet via mobipicker.com. Putting aside the blurry resolution and bad camera angle, the picture reveals a detail for the upcoming flagship iPhone 7 which is expected to be similar in appearance to the iPhone 6s.

The image shows details of a Home Button which appears to be completely flat with the bezel suggesting that Apple will forego the physical click for a touch sensitive capacitive Home Button. While the authenticity of the image is still in question, it is quite apparent that the button has no depth.

Rumors of a flush home button have previously been reported for the iPhone 7 as well but they happen to be rare incidents. The virtual button would allow Apple to fully waterproof the phone by allowing them to get rid of any gaps that allow water and debris to enter the chassis.

Functionally, the new button would work similarly to the currently existing Home Button with a tap on the screen replacing a full click. Speculatively, the button would also integrate 3D- touch pressure sensitivity in order to differentiate between light touches and deep presses.

The physical Home Buttons currently present in iPhones are considered design flaws as physically moving parts are liable to have a mechanical failure. Opting the use of a capacitive sensor would remove that liability as well as allow for waterproof design in future models.

This would also help the iPhone 7 stand out more from previous iterations due to the fact that the general design of the chassis is not expected to change much if at all. The only notable changes include some minor exterior changes whereas the internal changes include 256GB of storage, a faster processor, a beefier graphics processing unit and upgrades to the camera components.

A lack of reports about the details of the front screen does mean that the image should be treated with skepticism. Previously, several reports have also claimed rumors of a capacitive touch Home Button but as it stands, a majority of reports state that the iPhone 7 will likely be practically identical in appearance to the recent generation models.