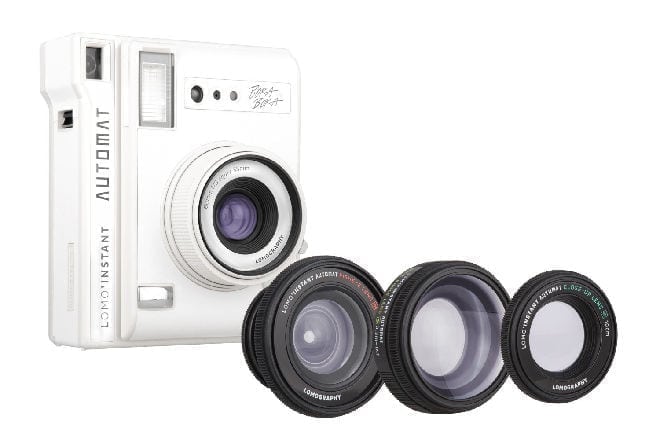 Perhaps one the most important things to us personally in today’s world are photos. The team at Lomography has enhanced the way photos are taken and brings an old process of photography back to life with their new Instant Automat camera.

The new Lomography Instant Automat film camera gives a whole new perspective on what Lomography really is. Apart from the unique color variations and styles, the Automat gives you the freedom of taking pictures without worrying about exposure. This is thanks to its brand new advanced shutter. The camera automatically chooses the correct amount of exposure that is needed to take a great shot. An important point with film photography, since  you don’t have an unlimited number of shots. There is no room for mistakes.

Lomography is not only a company, it is a new way of taking film images; one that goes beyond traditional photo-taking rules. The whole Lomography thing was started back in the ‘90s in Austria by the Lomographic Society. They invented a new way to take photos and a community of ‘lomographers’ that are known for their creativity and unique photos.  The company has created several cameras for its users, most famous being the Diana and Lomo’Instant collections.

The Automat was created in the summer of 2016. Its Kickstarter campaign was launched during that time and went out to reach an astonishing $920,000 with 5,645 backers. Considering its goal was$100,000, this was an accomplishment. With overwhelming support, the Automat is now growing strong.

I received the beautiful Bora Bora edition of the Automat and got the chance to test it out. Apart from its beauty, the Automat is absolutely compact and lightweight. Given the option to attach a camera strap, which can be bought at the Lomography Store website, the Automat comes in a very comfortable size and shape, one that is perfect for travel.

The front of the body is pretty self-explanatory. The lens can be set to three different focus settings for various situations. The self-portrait mirror (which is creatively integrated as the shutter release button). It also contains the light sensor, to produce the right amount of exposure. The flash sensor, which controls the amount of flash, and the remote control receiver. As if this camera isn’t already cool enough, Lomography integrated a remote control into the Automat’s lens cap. There is also the Colored Gel Filter Slot and the front of the viewfinder. These gels can be bought online and give some amazing effects using the flash.

The back of the body is where all the magic is controlled. The Automat allows you to shoot using two modes, Auto, and Bulb. Auto modes give the perfect amount of exposure and shutter speed to ensure maximum quality photos along with the flash (if it is on). Bulb mode gives one the ability to set the shutter speed, allowing for long exposure up to 30 seconds. Multiple Exposure can also take long exposure photos and overlap them to create amazing results.

The flash can also be turned on and off from the back and exposure can be controlled from the back. The camera back door seals the film in place. A LED bar on the side notifies the user how many frames are left. The Automat runs on two CR2 (3-volt) batteries. It has the option of being placed on a tripod. It also turns off automatically when it is not used for over 5 minutes.

Lomography has done an amazing job with the Instant Automat. It is really easy, fun, and interesting to use. Especially considering the fact that we live in a digital world. While film photography may not be as popular as before, it is still very exciting to use a film camera. As a millennial, I didn’t really grow up with film cameras but I’ve learned to appreciate and enjoy them. I loved that little fear of messing up a photo after knowing that I only had a specific amount of tries.  I’ve learned that every photo taken is a work of art and the risk is totally worth it.