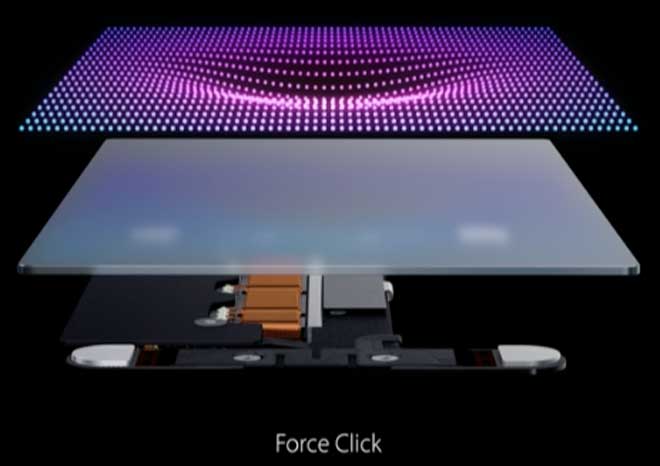 The Force Touch Trackpads do not have a physical button to press on. Instead, four force sensors measure how much force the user is applying to the trackpad.  If enough pressure is applied to indicate a mouse-down, the sensors communicate with the Taptic Engine which creates the sensation that a button has been pressed.

So what can you do with force touch?  For example, let’s say you want to rename a file in the Finder.  Presently you need to do a slow double-click to place the file name in Edit mode.  Click too fast and the file opens, very annoying.  With the new trackpad, a single force click places the file name in edit mode.

Force click also allows you to bring up “Quick Look”

The new trackpads also allow pressure sensitive drawing where the pen stroke is made thicker with the more pressure applied.

The new APIs will allow developers to add many new features to their apps that take advantage of the Taptic Engine. The built in tools include; Accelerator Controls, Table Row Actions and Spring Loading.

Open Quicktime, load a movie and apply gradual pressure to the fast-forward button from the Force Touch Trackpad.  Depending on the amount of pressure used will determine how fast the frames are previewed. Very cool, look’s like video editors will have one less piece of equipment to buy.  Accelerator Controls can be applied to Zoom buttons in Maps for example.  Another example uses continuous accelerator control, where you can control the rate that you move through your photos merely by increasing or decreasing the amount of pressure applied to the force touch trackpad.

Swiping an email (In a list view) to the right for one set of actions and to the left for a default action like delete.  A destructive action like delete requires the user travel a longer distance along the trackpad.

Spring loading is for example, when you hover over a folder and after awhile the folder opens. Now with force click, you can bypass the hover time and open the folder immediately.

You can look for more actions to be added as developers implement force touch support in there apps. If this is too much too soon to take in and you’re not comfortable relying on Force Touch entirely, you can always turn it off.  See our earlier article on this subject titled, “How To Disable Force Touch Track Pad on MacBook Pro“