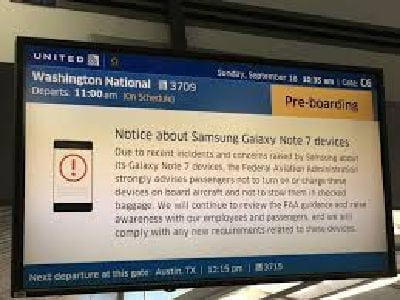 Samsung Galaxy Note 7 banned on airline flights according to emergency orders issued by Transport Canada and the FAA. The orders were effective immediately in Canada and at noon EDT Saturday in the U.S.

According to the orders, the phones can not be carried on board or in checked bags. The phones are also prohibited from being shipped as air cargo. They have been to be declared “forbidden hazardous material”. Violators will face criminal prosecution or fines. Officials have also warned that carrying these phones leads to an increase in potential danger to the flight.

“We recognize that banning these phones from airlines will inconvenience some passengers, but the safety of all those aboard an aircraft must take priority. We are taking this additional step because even one fire incident in flight poses a high risk of severe personal injury and puts many lives at risk.”

Galaxy Note 7 owners to be informed through text messages

Samsung is also working hard to spread awareness regarding the ban.

“Samsung, together with carriers, is working to communicate the U.S. Department of Transportation’s new order to ban all Galaxy Note7 devices in carry-on and checked baggage on flights,” said a Samsung representative in a statement to The Verge.

“We have encouraged airlines to issue similar communications directly to their passengers. Any Galaxy Note7 owner should visit their carrier and retail store to participate in the U.S. Note7 Refund and Exchange Program now. We realize this is an inconvenience but your safety has to remain our top priority.”

Text messages will be sent to all Galaxy Note 7 owners in the US regarding the ban. Samsung has recalled more than 2.5 million of the smartphones due to a manufacturing error. The Galaxy Note 7 was also discontinued earlier this week after a faulty relaunch. It was reported earlier that the replacements were also facing similar issues. So it seems that the company was left with no choice but to pull the plug on the Note 7.