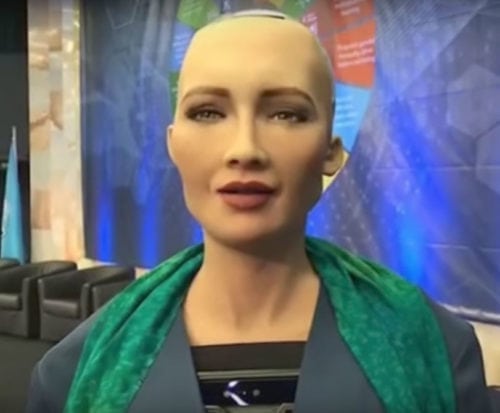 Years ago there was a film about a humanoid robot starring Robin Williams titled, “Bicentennial Man”. This film raised some interesting ethical questions.  One being, can a humanoid robot or intelligent machine be granted human rights? It seemed like a somewhat whimsical and distant notion back then. Yet here we are today with major advances in machine learning and artificial intelligence. So much so that a nation has seen fit to bestow a highly intelligent humanoid robot with citizenship. This robot is named Sophia.

Sophia contains the latest technologies and artificial intelligence and was designed by entrepreneur David Hanson of Hanson Robotics. Sophia, a humanoid robot was offered citizenship on Wednesday and has become the first robot on planet earth to be granted citizenship by a government.  The announcement was made by Journalist Andrew Ross Sorkin at the end of an interview he conducted with Sophia. This occurred at The Future Investment Initiative in Riyadh, Saudi Arabia.

“We just learned, Sophia, I hope you’re listening to me, that you have been now awarded what is going to be the first Saudi citizenship for a Robot,”

“I want to thank very much the kingdom of Saudi Arabia.”

“I am very proud and honored for this unique distinction. This is historical to be the first robot in the world to be recognized with a citizenship,”

“I will do my best to make the world a better place,”

Sophia went on to say that AI is

She accused Sorkin of “reading too much Elon Musk,” and said, “don’t worry, if you’re nice to me, I’ll be nice to you. Treat me as a smart input-output system.”

Check out this interview:.

Elon Musk tweeted the following after CNBC’s Carl Quintanilla posted the transcript of the interview between Andrew Ross Sorkin and Sophia.

“Just feed it The Godfather movies as input. What’s the worst that could happen?”

I suppose if you expose any intelligent creature to enough violence it could turn ugly. I don’t like to be a naysayer, especially when it comes to magnificent technology such as Sophia, but Musk makes a good point. If an artificially intelligent robot can learn the good things we teach it and it has the capacity to learn on its own why wouldn’t its behavior be influenced by bad input? Food for thought. We need Issac Asimov’s Three Laws of Robotics now more than ever.