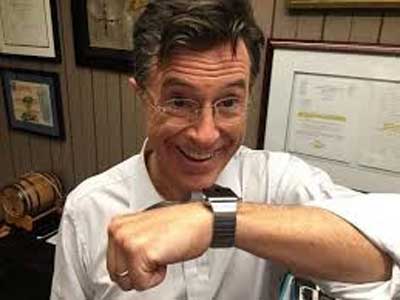 It is rumored that Tim Cook will  be on The Late Show with Stephen Colbert on 15th September. Colbert announced the news of Tim Cook’s impending appearance via Twitter. The Tweet was accompanied with a picture of Stephen Colbert wearing his Apple Watch and talking into it with the text reading “Siri, put Apple CEO Tim Cook on my calendar for Tuesday, Sept. 15. Oh, and come up with some questions to ask him.”

Though Apple’s CEO has previously sat down with a number of people for interviews, the appearance will be the first time that Tim Cook will be on a late night show.

The September 15th slot of Cook on the Late show comes almost less than a week after the big, depending on whom you ask, September 9th ‘Hey Siri’ event. It will also be the night  before the scheduled launch of the iOS 9 version which is slotted for a September 16th release.

Both the iPhone’s are now up for sale along with the introduction of a few key features in the Apple TV and iPad Pro. As Tim Cook will be on The Late Show so soon after the ‘Hey Siri’ event, we suspect he will most likely have impressive facts to share about the sales figures of Apple products.

Colbert’s Late Show has been inclusive of all kinds of influential people. People like George Clooney as well as politicians like USA’s Vice President Joe Biden and CEOs of tech companies like Elon Musk (Tesla) and Travis Kalanik (Uber) have appeared on the show. His interviewing style with CEO’s of tech companies has a mixture of serious and pointed questions with a slight peppering of sillier ones. Colbert asked Uber’s CEO questions about pursuing self driving vehicles whilst still claiming to be creating better jobs for taxi drivers. On the other hand he also asked Elon Musk if he was a super villain. Colbert is also a big fan of Apple and it’s products as evidenced by the fact that he took part in Apple’s October event in 2014.

It is hence not surprising that  Tim Cook will be on The Late Show on Monday. The Late Show airs at 11:30 p.m on CBS. Aired interviews and extended interviews are also available for viewing on the Youtube channel of the show, a day after it’s air date.