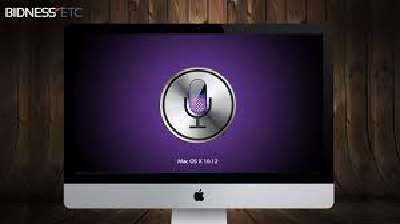 Apple introduced Siri the voice activated personal assistant on iPhones back in 2011. Since then Siri has made its way to all Apple devices such as the Apple Watch, iPads and even the recently introduce Apple TV but is still to be featured on Mac. It had been previously rumored that Siri on the Mac would be included in the Mac OS X Mavericks but it never did.

Siri On The Mac?

It has now been rumored that Siri on the mac will be introduced this year, when the next update Mac OS X 10.12 is revealed at World Wide Developers Conference (WWDC) in June. The update will be made available to the public in autumn.

Siri will have a different user interface than that available on iPhone and iPads. It will be available on the Mac’s menu bar in the same way as the spotlight search is available.

According to sources, the interface for Siri is not yet finalized but according to the latest designs when the icon for Siri is pressed on the menu bar a screen will appear that has sound waves to depict the speech input has been turned on. Users will also be able to use the “Hey Siri” command to activate the personal assistant. Additionally, users will be able to set a shortcut key for activating Siri on their Mac. Siri will have its own “System Preference” pane on Mac.

According to Apple patents, Siri on the Mac device will be able to do much more complex task then the feature can do on your iPhones. Siri will be able to help users multitask; it will act as a third hand for the user while he works on complex tasks.

Siri not being available on Mac devices till now can have plenty of reasons such as that Mac users tend to sit away from their device which could make it harder for Siri to fulfill their commands. Another, major reason for Siri not being integrated into Mac OS can be that Siri is not a popular way of controlling phones as many people do not like using voice commands to activate their phones.

macsiri
Previous ArticleApple Campus 2 Flyover VideoNext ArticleCompanies May Move Their Business Away from US; LavaBit